Warning: Declaration of GFSecureSubmit::maybe_validate($validationResult) should be compatible with GFPaymentAddOn::maybe_validate($validation_result, $context = 'api-submit') in /home/customer/www/bidwickliff.com/public_html/wp-content/plugins/heartland-secure-submit-addon-for-gravity-forms/classes/class-gf-securesubmit.php on line 961
 Art Highlights Archives • Wickliff Auctioneers 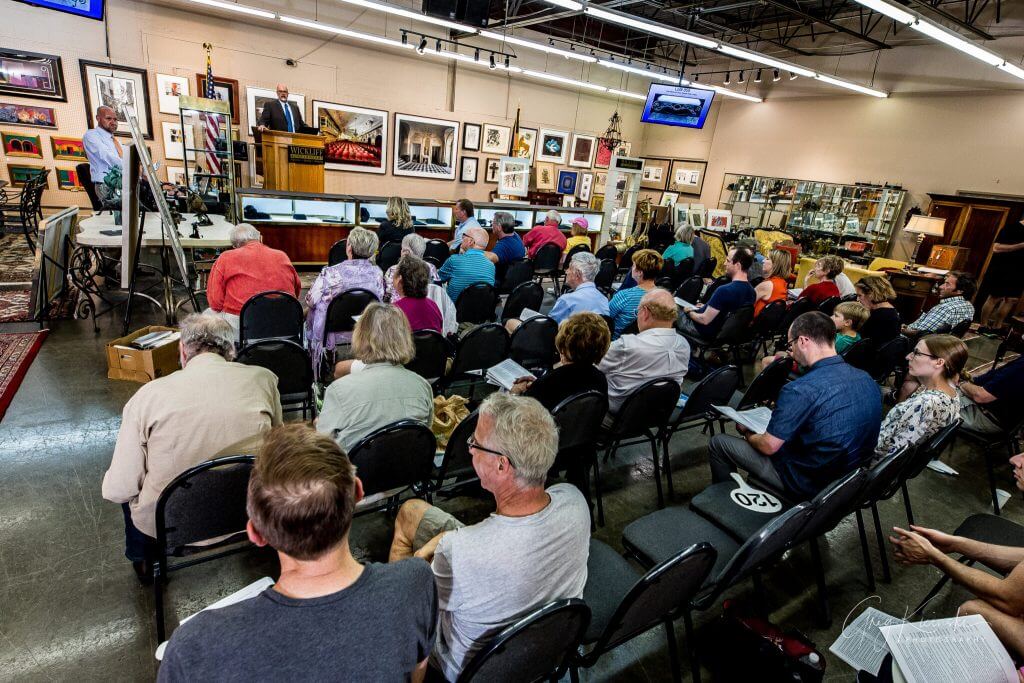 Refinement of Services, Vacating Current Space April 20, 2020 Wickliff Auctioneers today announced an evolution of their business model, a move that ownership said has been under consideration for nearly […]

Here are links to assist in using Live Auctioneers bidding platform, one of two we will be using for our March 21 Auction. As always, feel free to contact us […]

CARMEL, IN- Wickliff Auctioneers is pleased to have been selected by the family of the late Rev. Berniece Hicks (1918-2018) in the sale of the collection of antiques, art glass, […]

Antiques, Appraisals, the Economy and Matt 6:33

Today I received a message from a potential seller, for whom I had conducted an auction evaluation (not an appraisal, more about that later…), who assumed, after digesting the values […]

From the Desk of Angie Lawson

Preparation In a rare solitary moment at the end of the day in our office, I am able to forget about the “task” of work and walk around the gallery, […]

DECEMBER 13, 2017- Due to an increase in fraudulent bidder registrations using a variety of online platforms (and doing so with an unprecedented level of skillful deceit), Wickliff Auctioneers has […]

To learn more about CHAMP Camp, or make a donation, visit http://www.champcamp.org/ . A portion of the proceeds from our June 24, 2017, auction will be donated to CHAMP Camp […]

Plan to join us at Blend Cigar Bar in Castleton on June 22, for the Moyer Watch Auction! Great deals on top-quality watches for gents and ladies. Contact Lauren@moyerfj.com or […]

Memorial Day, May 29th, by Darin

Amid the haze of the BBQ smoke and the sounds of splashing swimming pools, picnics and frivolity, the unofficial beginning of summer comes on Monday, May 29th, observed in the […]

“The Art of the Auction”, with the Alliance of the IMA

March 6, 2017 Back by popular request, Wickliff Auctioneers is again pleased to present our Final Four for Charity contest, via Yahoo Tourney Pick ‘Em, to benefit your favorite kids’ […]

In the January, 2017, edition of the New England Antiques Journal, Wickliff Auctioneers’ President and Senior Auctioneer, Darin Lawson, was featured in the magazine’s “Hammered Down” section, which features auctioneer […]

Mom’s Dishes, and Why the Antiques Market has Changed

The auction and antiques world has changed quite a bit in my twenty-five years as an auctioneer. People’s desires for decor and possessions have changed, and along with that, different […]

(This is a re-post of the article written in 2014) In order to continue to inform our auction patrons about bidding and buying at our auctions, we’ve prepared this memorandum […]

Chicago, IL: Bidsquare is proud to announce the addition of Wickliff Auctioneers to the roster of leading independent auction houses now conducting business on www.bidsquare.com. Launched in September 2014, Bidsquare […]