Dan Woodson was born in 1945 in New Castle, IN, and attended school in Muncie, where he currently resides. In 1962 he enlisted in the US Army during Vietnam. Returning home to Indiana in 1967, he began a 33-year career in the sign industry. He found employment at a Muncie sign shop and that began his creative pursuit. C.J. Grice, one of the best sign artists in Indiana, became Dan’s mentor. Through years of study and practice, Dan became highly skilled at the craft, becoming a master sign painter, a level that few achieve. In 1999, his artistic abilities and design construction for special displays and sign systems earned him a national award. In 1982, Dan designed an in-house sign facility for Marsh Supermarkets, and managed that department until January, 2001, when he retired to become a full-time artist. During 1994, Dan committed himself to landscape painting. Practicing after work, he continued to study the paintings of other artists, worked to understand their methods, and painted scene after scene in oil. 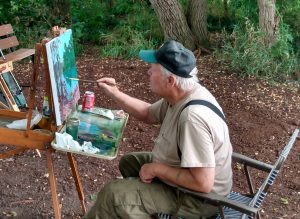 Dan’s formidable talent made up for his lack for formal training and allowed him to develop at his own pace, in a truly original style. His color blindness has become an asset that allows him to interpret minute tonal differences in landscape scenes that others, influenced by color, might overlook. This desire to paint has turned his weaknesses in strengths.

Since Dan started oil painting in 1994, he has won many awards. Some of the major ones are two paintings in the top two hundred at the national “Art for the Parks”, and first place in the national competition for International Paper. At Indiana Heritage Arts exhibitions he has won Best of Show two times, and Award of Excellence, and several merit and memorial awards. He also has achieved Best of Show and many memorial awards at the Richmond Art Museum annual exhibitions. The Hoosier Salon has awarded Dan Outstanding Oil- Traditional, Outstanding Oil, Best Impressionistic Landscape, and other awards. He has also received eight first place, three second-place, and three popular-choice awards at the T.C. Steele Great Outdoor Paintout.

Other major accomplishments include the “Painting Indiana- Portraits of Indiana’s 92 Counties” project, which Dan conceived with friend Ann Carter, which remains the most successful art project of its kind in decades. He simultaneously developed the Indiana Plein Air Painters Association, which has become the largest and most active outdoor painting group in Indiana. In 2012, with the help of the Richmond Art Museum, Dan started the New Richmond Group of painters.

Since Dan began painting in 1994, he has participated in many events, including judging various shows in Indiana and Ohio, hosting many workshops and mentoring other artists. Ask Dan what his favorite thing about painting is, and he will respond, “All my artist friends that I have made”. Although Dan has been very successful in selling his work and competing for awards, he sees these things as merely a means for him to continue to paint.

Tom Woodson, born in 1961 in Muncie, IN, has been a life-long resident of Indiana and attended Muncie schools. Growing up, Tom was always interested in art and would spend

Dan Woodson was born in 1945 in New Castle, IN, and attended school in Muncie, where he currently resides. In 1962 he enlisted in the US Army during Vietnam. Returning

CARMEL, IN- Wickliff Auctioneers is pleased to have been selected to be the official auction company for the soon-to-be-historic art and conservation project, “Indiana Waterways- The Art of Conservation”. A