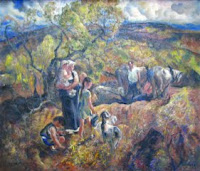 Wickliff Auctioneers is honored to have been chosen by the family of Leland G (Lee) Howard (1926-2011) to market his art collection, slated for sale on Friday, March 30 at 6:30p.m.

Mr Howard was and is recognized as a notable art historian, collector and patron of the arts, specifically, fine art. He was an enthusiastic researcher, having been published twice, first with “Otto Stark”, 1977, published by the Indianapolis Museum of Art in conjunction with the exhibition that same year, for which Howard also served as guest curator. The softcover, color illustrated work included biographical information on Stark and background of the artist’s life and work, making the book much more than just an exhibition catalog. According to the book’s foreword, written by Robert Yassin, former IMA director, Lee’s interest in Stark began in the late 1960’s, following his discovery of a Stark painting hidden behind a door in an antique shop.

Following Lee’s retirement from Eli Lilly in 1984, he formed L and P Fine Art, and vigorously engaged in the buying, selling and research of fine art. He traveled throughout the United States, Europe and Great Britain meeting with descendants of artists, gleaning historical information from them, and also searching archive information found at institutions of higher learning.

Lee’s second book, “Walter Shirlaw, A Biography and Catalog of His Art from Indiana Collections”, 2005, Indiana Wesleyan University, was also published in conjunction with an exhibition of Shirlaw’s art that was displayed at Indiana Wesleyan University, the Sheldon Swope Art Museum (Terre Haute, IN) and the Richmond (IN) Art Museum in 2005 and 2006. This time, Lee’s work was published in hardcover, and is replete with color illustrations, plus of course, a detailed chronology of Shirlaw’s life and work. In the foreword of the book, Professor Rob Curfman, Chairperson, Art Division, Indiana Wesleyan University, states that Howard was responsible for the preparation of the Shirlaw exhibition and the accompanying catalog. He also comments, “Of the four principal American artists who studied at the Royal Academy of Art in Munich, Germany, during the 1870’s, only the life and art of Walter Shirlaw N.A. has been largely neglected. The others, William Merritt Chase, Frank Duveneck and, to a lesser degree, Joseph Frank Currier, have been chronicled and exhibited during the 20th century.” Shirlaw, born in Scotland, moved to the U.S at age 3 and became an American citizen in 1857. Among his many accomplishments, he founded, as was the first president of, the Society of American Artists, in New York. Shirlaw died in 1909 in Spain, and is buried there.

Lee’s interest in art and art research made him a recognized collector and patron, and he served on the boards of the Hamilton Center and the Sheldon Swope Art Museum, both in Terre Haute, IN, and worked with the Indiana University Art Museum in Bloomington. Lee was well-known and highly regarded throughout the academic art community in Indiana, and his eagerness to bring to light the life and work of historic artists and their work will be missed.