Tom Woodson, born in 1961 in Muncie, IN, has been a life-long resident of Indiana and attended Muncie schools. Growing up, Tom was always interested in art and would spend countless hours drawing. In those early years, it became obvious that Tom had tremendous talent, but more than that, creativity. Whatever he did, he had no fear of failing, which sometimes is an asset. 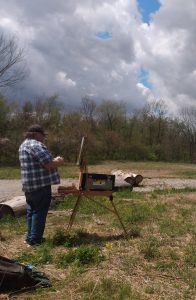 Tom started oil painting in 1998, when he would visit his brother, artist Dan Woodson, in his studio, as Dan was painting. Tom was fascinated with the medium and asked if he could try it. Dan gave him some canvases, some oil paint and a few old brushes and sent him on his way, thinking he would try it, become frustrated and give up. Two days later, Tom, with a big grin on his face, returned with a canvas, wet with paint, and wanted to know what Dan thought. The answer was obvious- Dan bought Tom new sets of brushes, oil paint, easels and bunch of blank canvases and set him up in a private studio. Dan was amazed to see those first paintings Tom completed. They looked like they were done by someone who had painted for years. With no formal training, Tom was on his way to developing his own style, and has successfully done just that.

Since that time in 1998, Tom has painted hundreds of paintings and has entered many shows in Indiana, winning awards at several, including Best of Show awards, merit awards and everything in between. Toms paintings are now in private collections, as well as corporate and museum collections. Tom has traveled all over the United States to paint in various venues, but still prefers to paint en plein air, in Indiana.

Over the years, Tom has had the opportunity to mentor other artists, and shows a true desire to make a difference. Tom agrees with brother Dan’s statement made years ago, “You need to hold out a helping hand to other artists as other artists are the ones who helped you along the way”. For Tom, all the awards, sold paintings, opportunities to judge shows, travel and do workshops are not as important as the friends, other artists and collectors he has met.

Tom has stated many times, “Painting changed my life. It’s hard to believe you can have so much fun painting, and get paid for it!” More important that anything else Tom has accomplished, is his sweet spirit. If you know Tom, you love Tom.

Tom Woodson, born in 1961 in Muncie, IN, has been a life-long resident of Indiana and attended Muncie schools. Growing up, Tom was always interested in art and would spend

Dan Woodson was born in 1945 in New Castle, IN, and attended school in Muncie, where he currently resides. In 1962 he enlisted in the US Army during Vietnam. Returning

CARMEL, IN- Wickliff Auctioneers is pleased to have been selected to be the official auction company for the soon-to-be-historic art and conservation project, “Indiana Waterways- The Art of Conservation”. A