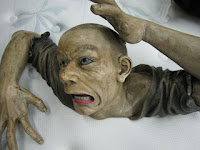 Recipe for unusual auction– Mix: dressed-up mannequins, hand-crafted accessories including fake ‘desserts’, contemporary furnishings and a kids’ costume contest, combine thoroughly, let stand, sell to highest bidder.
The entirety of the Robert Wietholter estate will be sold at auction at Wickliff’s Carmel gallery Saturday, October 27, at 10 a.m., and promises to be the most unique estate auction held in central Indiana this year. Featured items include the many mannequins that Wietholter used as décor throughout the home (all of which he had named), craft items such as cakes, pies and treats made of resin and foam, a stuffed pony that is 5’ long and 4.5’ high that cost $2500, and many more items that Wietholter either special ordered or made from scratch to decorate the 2-bedroom garden home near the Village of West Clay. 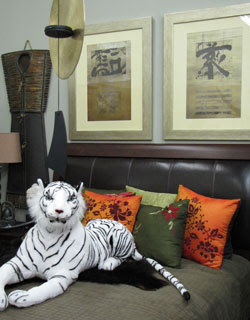 Wietholter, along with wife Deanna, owned and operated the Country Squire Florist in Bluffton from 1970 to 2001, and was a highly-regarded floral designer. He served as a decorator at the White House for Christmas during the Ford administrator, and was a commentator/consultant for the W.J. Cowee company.
“I am confident we have never sold an estate collection as unique as this”, said Darin Lawson, President, Wickliff Auctioneers. “Not only are there unusual items, but there is a consistent level of quality throughout the decorative items and the furnishings that should have a broad appeal.”
In keeping with the ‘costume’ spirit of the estate, Wickliff is also sponsoring a children’s costume contest during the auction preview on Friday, October 26. The gallery is open from 2 until 7 p.m., and costume judging will be held at 6:30 p.m. Costumes will be judged on originality, and $50 gift card prizes will be awarded to winners in three categories, best U.S. historical figure, best Bible character and most original.
Wickliff Auctioneers is widely regarded as Indiana’s Leading Fine Arts auctioneers, and has been in the same Carmel location for over 20 years. More information, photos, preview times and auction terms, can be found at www.wickliffauctioneers.com or by calling 317-844-7253.